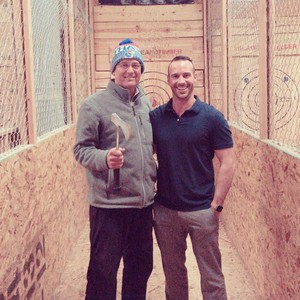 Danny Faught continually challenges himself in all aspects of his life, especially when it comes to athleticism. He came across the D-10 in Houston and knew he had to participate because the donations were going towards MD Anderson, the hospital that helped his father, Ronald Faught Sr., far exceed the 5 year expectancy he was given in 2006 which gave 13 years back for him to spend with his family. After battling AML, MDS and prostate cancer, Ronald Faught was laid to rest on February 9th, 2019. Danny will be competing in the D10 on November 9th, 2019, in the city where his father received his treatments so he can give back to the place that granted his father extra time with his family. It’s an honor he isn’t taking likely. “Participating in the D-10 and helping raise funds and awareness is one thing I can do to help give back, even in a small way. Dad always endorsed the opportunity for me to better myself as well as to help others do the same and this is the perfect opportunity to do both.” Please join Danny and the many others competing to raise awareness for this very important cause. “A Pessimist Sees The Difficulty In Every Opportunity; An Optimist Sees The Opportunity In Every Difficulty” – Winston Churchill